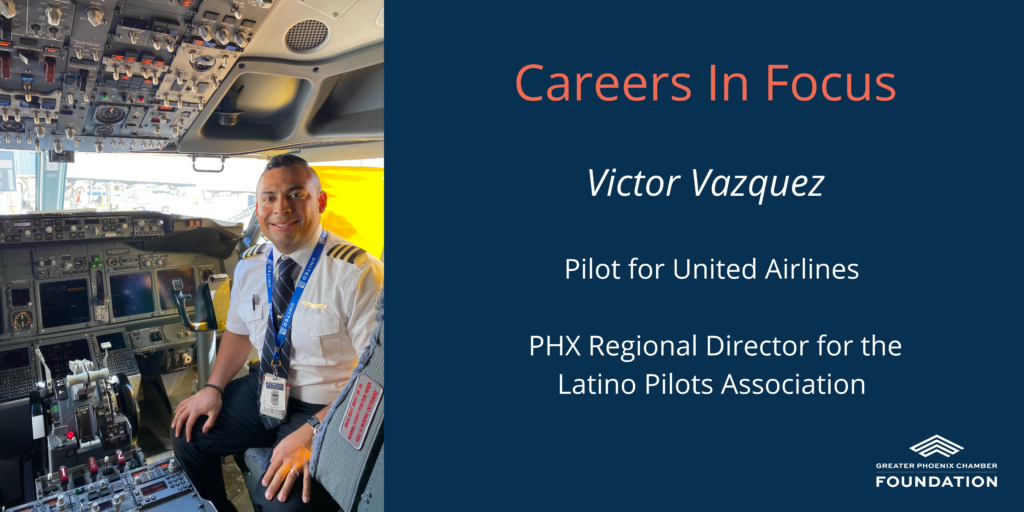 Through its Careers in Focus campaign, the Greater Phoenix Chamber Foundation shares meaningful career insight from Valley professionals. Below, Victor Vazquez shares his career journey to becoming a proud pilot for United Airlines and his involvement with the Latino Pilots Association.

Vazquez said his interest in aviation began at an early age as he traveled to visit extended family. He said he felt a calling and loved the idea of connecting people around the globe. In high school, Victor took his first flight lesson which led him to pursue a career as an airline pilot.

Vazquez completed his flight certificates at a local flight school in Glendale while finishing academic pre-requisites at the Maricopa Community Colleges. Soon thereafter, he transferred his credits and flight courses to Utah Valley University where he completed his bachelor’s degree in Aviation Science: Professional Pilot Studies.

To obtain flight experience, Victor instructed and taught primary flight training in Arizona. After he met the flight requirements, Vazquez flew for a regional airline with smaller routes and jets for an airline partner. Victor was a first officer (co-pilot), for 3.5 years, where he supported the captain in the pre-flight planning, flying the airplane, and providing a safe operation from gate to gate. He then had an opportunity to upgrade to Captain, which he pursued and remained a captain at his regional for over three years. As a captain, Vazquez ensured safe flight operations for his crew and passengers and was able to set the tone and lead his team onboard his aircraft. While he held that position, Victor worked with many groups ranging from first officers, flight attendants, dispatchers, gate agents, rampers, mechanics, and air traffic controllers.

After that experience, Vazquez began working as a pilot for United Airlines, where he now flies to Hawaii, Mexico, and various parts of Central and South America on the Boeing 737. Through his journey, Victor has recognized his love for working together as a team to get people to their destinations.

When he is not flying, Vazquez serves as the Phoenix Regional Director for the Latino Pilots Association. It is a non-profit, volunteer organization looking to provide mentorship, and outreach to help make aviation more accessible to underrepresented groups of all backgrounds.

Victor pointed out that the largest barriers to becoming a pilot are associated with the financials of training, which is where the organization’s efforts in creating partnerships with the industry and local leaders play a big role. Having community engagement and financial support from industry leaders allows the Latino Pilots Association to bring aviation to those who may think this career is out of reach for them. “A very small percentage of pilots in the industry are of Hispanic/Latinx descent and through our partnerships, we hope to bridge that gap to make connections with our students, and ultimately provide them avenues that will make this career possible for them too,” said Vazquez.

Q: Why is it important that the Greater Phoenix Chamber Foundation continue to prepare Arizonans to successfully enter our workforce?

A: “The Latino Pilots Association also has the opportunity of collaborating with organizations such as Greater Phoenix Chamber Foundations that allow working with their respective partners. This helps create opportunities for students such as improving their leadership skills and empowers them in the flight deck and beyond.”

Q: What advice do you have for people who may be interested in a similar career?

A: “My advice to a student looking to join the aviation sector would be to never sell yourself short and find yourself a mentor. On the days when I had doubts, I had a mentor that would guide me in the peaks and valleys of my aviation journey. Apply the same work ethic that you have for your passion, for all things. Many students think that because a class may not seem applicable to their career choice, they shouldn’t put the same amount of effort into it. I believe, that having a focused mindset should carry in all aspects of your life to truly live out your full potential.

For students, if you don’t have a mentor, please feel free to reach out to our organization to see how we can help. For our prospective partners, we look forward to collaborating with you in the future and working towards delivering a positive impact in our communities.

For more information, we can be found at www.latinopilot.org. 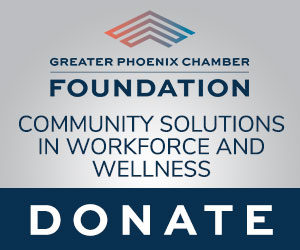 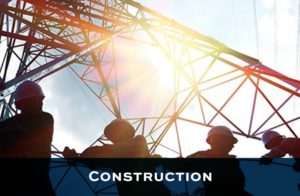 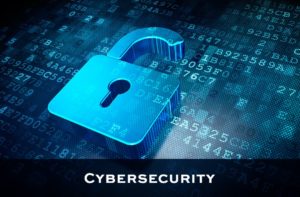 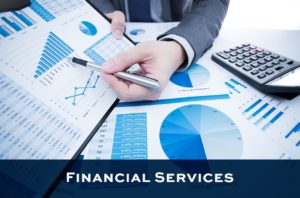 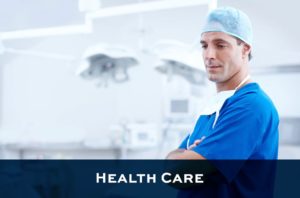 Leading the charitable & education objectives of the @phxchamber & promoting economic prosperity and quality of life for the Greater Phoenix region.

ATTENTION: The Foundation is soliciting proposals from qualified persons or firms to develop a comprehensive Arizona-focused workforce study and subsequent industry-focused workforce gap analysis reports. Proposals are due 2/6 at 5:00 p.m. MST. https://phoenixchamber.com/2023/01/24/request-for-proposals-for-consultant-to-complete-annual-workforce-study-and-industry-focused-workforce-gap-analysis-reports/

For over 35 years, the @phxchamber has recognized small and mid-to-large businesses making significant contributions to our state. Nominate an exceptional business for an IMPACT Award category by February 3rd at 5 pm! https://phoenixchamber.com/events/signature-events/impact-awards/impact-award-nominations/